This October 8, 2007 St. Petersburg Times article offered a sneak peak inside Finca Vigia, Ernest Hemingway’s home in Cuba from 1939 to 1960, and noted that:


-While the interior of Finca Vigia is closed to the public, visitors can peer through open windows into the rooms via a walkway that wraps around the outside.
-A large bullfighting poster hangs on one wall in the living room, alongside stuffed animal heads from hunting trips to Africa. Original bottles of Old Forester bourbon and Cinzano vermouth stand at arm's length from Hemingway's chair.
-Books line shelves in most of the rooms, including the bathroom. At one end of the main room is Hemingway's old RCA record player still in working order, next to a large collection of LPs, from Bessie Smith to Bach.
-Hemingway liked to entertain. Errol Flynn dined at his table. Cary Grant slept on the sofa, and Ava Gardner famously skinny-dipped in the pool.
-Hemingway wrote his books standing up in his bedroom, the only air-conditioned room in the house. His Royal typewriter is there. Materials for his research lie strewn over the bed.
-One room is reserved for cats. There were 60 of them in and around the house. Hemingway kept four cows to provide milk for them. Hemingway also had four dogs, Black, Negrita, Linda and Neron, who are all buried in marked graves in the garden.
-In the bathroom, Hemingway scribbled his weight every day on the wall. By the time he left Cuba for medical treatment in 1960, the wall shows he had lost almost 50 pounds. He committed suicide a few months later in his house in Idaho.

The entire St. Petersburg Times article can be read here.

Posted by Ernest Hemingway Biography at 9:02:00 AM No comments: 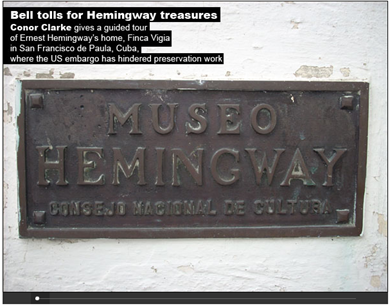 Posted by Ernest Hemingway Biography at 9:11:00 AM No comments: