In this October 8, 2006 Boston Globe article, it was noted how the US State Department granted Rosalba Diaz, the curator of the Hemingway Museum in Cuba, a rare visa for her studies at the Northeast Document Conservation Center in order to help her preserve Ernest Hemingway’s books and papers at Finca Vigia:


In the quiet Andover offices, Diaz observed advanced techniques on how to repair damaged pages and restore papers and book covers. She watched how others have repaired torn pages and saw how the center protected aging documents.
“We're working on preserving all the materials we have at the museum," Diaz said in Spanish. “We have books, we have maps, photos, and documents with his writings that need to be protected."
The techniques she is picking up are important, said Diaz. Hemingway's former home is filled with 9,000 books with notes written in the margins, thousands of letters exchanged with famous people of the time, and original rough drafts of some of his well-known works, she said.

The entire Boston Globe article and accompanied audio slideshow can be read here. 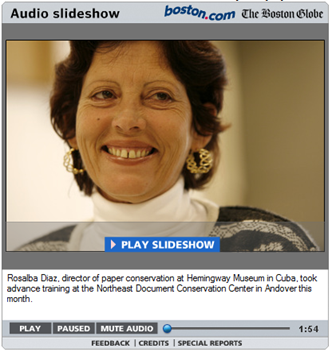 Ernest Hemingway’s Finca Vigia (Overlook Farm) has been battered by rain, humidity, heat, hurricanes and termites and it was included by the National Trust in its 2005 list of America's 11 Most Endangered Historic Places - the only one outside the United States.

Moreover, this 2006 article from the Chronicle of Philanthropy quoted Mary-Jo Adams, the executive director of the Hemingway Preservation Foundation, as saying that:


"We have Hemingway papers that are deteriorating in tropical climates," she says. "We want to preserve them for scholars for decades for come. I think when you sit down with people and explain it, it's very logical."

However and despite the Cuban trade embargo, the Hemingway Preservation Foundation and the National Trust for Historic Preservation have for almost a year been sending architects and preservationists to Havana to advise a Cuban group about how to fix the structural problems that afflict the villa.

The entire Chronicle of Philanthropy article about these preservation efforts can be read here.

Posted by Ernest Hemingway Biography at 8:54:00 AM No comments:

The Day (New London, CT.) has noted that preservation work is well under way in Cuba on the Pilar, the 40-foot fishing boat on which Ernest Hemingway conceived such novels as “The Old Man and the Sea” and “Islands in the Stream.” It was noted that:


Hewson, vice president for watercraft preservation and programs at Mystic Seaport, toured the grounds of Finca Vigia, he found that Cuban officials had implemented recommendations he had made three years ago and had begun to preserve Hemingway's 40-foot fishing boat, Pilar.

Hemingway had bought the Pilar, a Wheeler Playmate, in 1934 from a shipyard in Brooklyn, New York. He then sailed it it to Cuba where he lived from 1939 until 1960. In his will, he left the Pilar to his boatman who then gave it to the Cuban government.

The Association for Preservation Technology International (APT) has an article about preserving Finca Vigia, Ernest Hemingway’s home in Cuba. It was noted that:


The Cubans explained how five hurricanes in 2005, including much damage caused by Wilma, had each taken some toll and slowed overall job progress, but they continued work on many fronts, including taxidermy, mural conservation (in this case Hemingway's handwriting on the bathroom wall recording his daily weight), and termite eradication. The greatest damage caused by hurricane Wilma was to the large shed roof that protects Hemingway's fishing yacht, Pilar, displayed on blocks at the tennis court.

You can read more about efforts to preserve Hemingway’s home here.

Posted by Ernest Hemingway Biography at 8:22:00 AM No comments: